Enemy at the gates?

Yesterday was only the second time since 1967 that there was a general strike in Hong Kong – and the very first time under Chinese rule.

With pitch battles between protesters and the police now a daily (and ever more violent) occurrence, and no end in sight, as neither side appears willing to back down from their entrenched positions, it’s hard to see an obvious solution to the crisis.

The continuous fall in the Hang Seng index over the last month has now erased all of the gains made in 2019, and the dizzying drop seen over the last few days shows the panic that is now beginning to take hold, as market participants flee to safer holdings. Capital markets activity has come to a complete halt, and the only offshore IPOs by Chinese issuers coming to market right now are on the NYSE, rather than in Asia.

The health of the Hong Kong economy depends heavily on that of its stock exchange, as well as property prices and trade with the Chinese mainland. The devaluation of the yuan to below 7 per US dollar will put further strain on the city (whose currency is pegged to the US dollar), at a critical time and what could well be its most dramatic moment since the return of the territory by the British Crown to China. 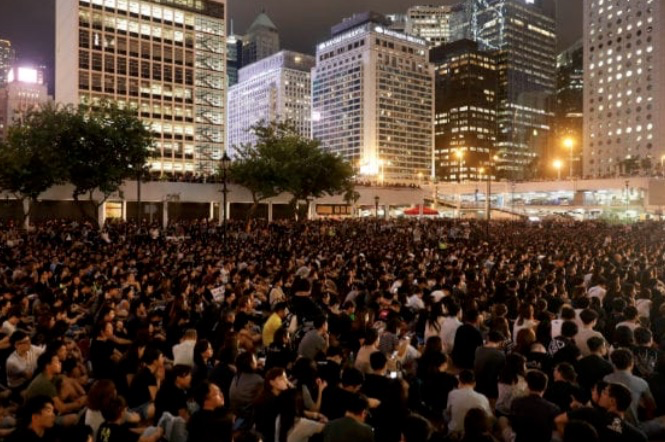 Moreover, the deafening silence and lack of concrete proposals on the part of the Hong Kong government, after more than nine full weeks of protests, has been nothing short of astonishing.

This is, after all, a government which, unlike many of its counterparts in the Western world, is actually sitting on substantial cash reserves (with fiscal reserves well above the HK$1 trillion mark). Yet, it is also one that has been doing little of note to address many of the root causes behind the recent demonstrations: a cost of living and property prices that are among the highest in the world; ingrained oligopolies across much of the economy; pension arrangements that are not fit for purpose; and fledging education and healthcare systems for a significant part of the population – not to mention environmental issues.

Burying its head in the sand in the hope that the crisis will somewhat go away, and blaming “foreign forces” for what are largely self-inflicted woes will only make it appear further out of touch in the minds of the protesters.

Hong Kong has been living on borrowed time since the retrocession to China: in the long run, as the mainland becomes ever more assertive and further opens up to the wider world, it’s likely to become “just another Chinese city”, having served its purpose as a conduit of convenience, to channel funding and trade into, and out of the PRC.

While it remains the mainland’s fourth largest trading partner, much of this is actually round tripping, and the city now only accounts for less than 3% of China’s GDP, as compared to 27% in 1993 (although Hong Kong is still obviously well ahead of a per capita basis). In fact, it was already overtaken by Shenzhen in 2018, as a percentage of the PRC’s economy.

The worry now, is that the end of the “one country, two systems” principle could happen well ahead of the official, 2047 deadline.

Hong Kong used to be a very special place. It’s still special – but, increasingly, for all the wrong reasons.