HONG KONG (Dow Jones Investment Banker) – A 10-year analysis using data supplied by Dealogic shows the number of IPOs globally has remained relatively constant, as well as the relative proportion of IPOs conducted in the Asia-Pacific (APAC) region and in Hong Kong in particular. However, there has been a clear shift in terms of the bigger deals, a much larger share of which now commonly takes place in the Far East.

While there have been down years (in 2002-03 and 2008, in particular), the number of IPOs globally has remained relatively stable over the last decade at about 1,500 offerings every year. And on a continuing basis, about half that number comprises deals listed in the APAC region; Hong Kong-listed IPOs have, on average, accounted for about 5% of the world’s total number.

But the amount of IPO funds raised over the same period paints a very different picture. Global growth was a respectable, though unspectacular, 12% on a compound annual basis. By contrast, the growth in total IPO volumes raised in the APAC region was more than double that level at 25% – and 32% in Hong Kong. 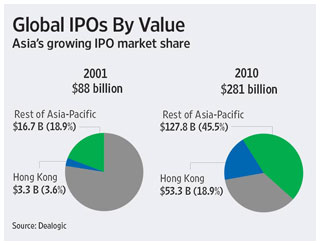 Naturally, such a material shift has had a significant impact on other metrics.

According to the World Federation of Exchanges, the world’s market capitalization increased by 33% between 2000 and 2009 to about US$47 trillion. At the same time, the share represented by the APAC region doubled, from 16% to 31%, at the expense of both Europe, the Middle East and Africa (EMEA) and the Americas. The decline was particularly acute in the latter, whose share fell from 53% to 41%.

Similar changes could also be observed in terms of the value of shares traded, which increased 61% over the period globally. There, the relative share of the APAC region increased from 10% to 23%, with the EMEA markets taking the brunt of the fall, from 24% to only 16% of the global pie.

With markets in turmoil, this year is unlikely to see a replay of 2010. Globally, at US$142 billion, IPOs are currently only at about half of the year-end volume achieved in 2010. For APAC deals, the figure stands at only 40%, and at 45% for Hong Kong.

The main reason is clear: a lack of mega-deals.

In 2010, the world’s top 10 IPOs accounted for combined deal value of US$97.8 billion. These included the flotations of General Motors Co., Agricultural Bank of China Ltd. and insurer AIA Group Ltd., each of which topped the US$20 billion mark.

By contrast, this year, the 10 largest global deals together stand at just over US$38 billion, with only one IPO (that of Glencore International PLC, listed in both London and Hong Kong) reaching US$10 billion and only two above US$5 billion. 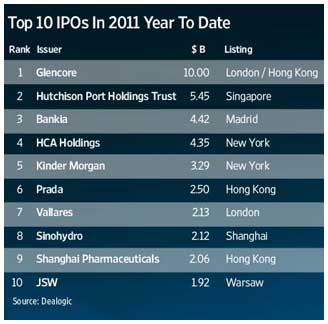 With the postponement of the proposed, US$9.5 billion privatization of Loterias y Apuestas del Estado in Spain, and the recently priced IPO of China’s CITIC Securities Co. Ltd. in Hong Kong only achieving proceeds of less than US$1.7 billion, the global tally is unlikely to materially change for the rest of the year, despite a massive pipeline of new issue candidates.

However, this year again, more than half of the top 10 offerings will have listed in the Far East.

So 2011 is proving to be a difficult vintage for ECM bankers across the board, but, more than ever, the trend East remains on track.

[This article was originally published on Dow Jones Investment Banker on 3 October 2011 and is reproduced with permission.]