In Asia, cornerstone investors are regarded as a vital ingredient for successful major listings. And Hong Kong – where such investors are subject to lock-up restrictions – has also increasingly seen the advent of anchor investors.  read

Amid more deals coming to market in recent weeks, there has been much talk about a potential re-launch in Hong Kong of WH Group’s IPO, a deal that was famously pulled last April after a mammoth syndicate of 29 bookrunners failed to secure interest from investors. read

I was interviewed on CNBC’s “The Call” this morning by anchors Bernie Lo and Emily Chan on what’s in store for investors with the IPO in Hong Kong of mainland Chinese insurer PICC Group. read 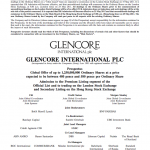