HONG KONG (Dow Jones Investment Banker) – Cornerstone investments have remained a common component of IPOs in Hong Kong in 2010 and that is helping fuel an argument around just how fair they are.

For investment banks, the involvement of cornerstone investors provides leadership and momentum, sending a strong signal to the market that the deal constitutes a worthwhile investment. The reality is also that, in a volatile trading environment, they make possible the launch of more challenging transactions.

How ethical the practice really is is regularly debated in the territory. In January 2008, the then Chief Executive of Hong Kong Exchanges and Clearing Ltd, Paul Chow, was quoted as saying that it would be discussed in a consultation paper, following concerns that it may favor a small group of institutions at the expense of a vast majority of others. Commentators have also regularly picked up on the issue with talk of an inside game and of unfair behavior. It’s a complaint we may be hearing more of these days, as investors agitate for more even-handed treatment from advisors and their clients.

In a cornerstone tranche, well-known, large institutions, including tycoons’ private offices, sovereign wealth funds and sizeable asset management firms commit to buying pre-agreed allocations, irrespective of the final offer price and without a discount. Some funds from the Middle East in particular have featured visibly in some of the largest IPOs earlier this year.

The practice, which doesn’t contravene the listing rules in Hong Kong but isn’t explicitly regulated, involves contacting a select group of potential backers a few weeks prior to launch. These are shown an advanced draft of the prospectus, and benefit from a due diligence meeting or call with management, as will many other large investors during the road show. However – and unlike other public shareholders – they are locked-up for a period of time after the offering, usually six months.

Cornerstone investor allocations in Hong Kong may also enjoy provisions insulating them from the claw-back triggers that automatically re-allocate stock from institutional to public offer tranches, in the event of a significant demand by retail investors.

What is perhaps debatable is that these investors’ involvement is often in no small measure what makes these ECM transactions attractive or, in some cases, simply just possible. While well-known governance advocate David Webb argued at the time of United Co. Rusal’s $2.2. billion IPO in January 2010 that “the presence of cornerstone investors is of no value to investment decisions”, their participation provides confidence to the less sophisticated and retail investors.

Institutions often complain that they never receive enough stock on “hot” deals, but end up with sizeable allocations on transactions that have failed to generate a wide interest. Cornerstones may, to some extent, have solved the equation – their very involvement can contribute to creating sought- after offerings, in return for sizeable, pre-agreed allocations. And while some of these investors are sitting on paper losses, their commitments often result in significant gains.

Low Chee Keong, an Associate Professor in Corporate Law at the Chinese University of Hong Kong and a former member of the Listing Committee of the Stock Exchange there, is an academic who has regularly pointed the finger at cornerstone investments, even publishing an empirical study on the subject in 2009. In its conclusion, he reasoned that “despite the supposed risks that are assumed by cornerstone investors, the evidence suggests that these are more perceived than actual”. He also questioned the fairness of such arrangements, adding that “it is at best difficult to justify their existence” and that “at worst, one could contend that they serve primarily to prefer a select group of investors by the underwriters”, perhaps even constituting “a sophisticated form of bribery”. 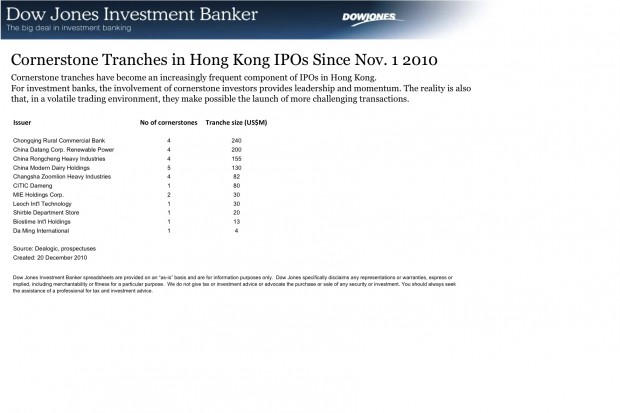 The practice, meanwhile, continues unabated. Of the 24 IPOs priced in Hong Kong since Nov. 1, 11 (including pretty much all of the larger deals) involved cornerstones.

[This article was originally published on Dow Jones Investment Banker on 20 December 2010 and is reproduced with permission. It also appeared on WSJ.com, the website of The Wall Street Journal]