Divining the structure of Samsonite’s IPO

HONG KONG (Dow Jones Investment Banker) – Little information has been disclosed about the long-awaited, proposed IPO in Asia of Samsonite. But the composition of the bookrunning syndicate and the earlier appointment of independent advisers offer insights into the structure of the offer, including the likelihood that the listing will be in Hong Kong.

There are few surprises with the syndicate, which comprises at the top line Goldman Sachs, HSBC, Morgan Stanley, Royal Bank of Scotland and UBS.

Goldman was earlier reported to have been advising on the deal, while the other lead banks also all have good ECM credentials in Hong Kong. HSBC and UBS, in particular, worked on the $787 million equivalent IPO of L’Occitane International SA in May 2010, while Goldman is one of the bookrunners on the forthcoming offering by Prada SpA.

UBS, along with Lehman Brothers, was also financial adviser to Samsonite’s owner, CVC Capital Partners, when the private equity firm bought Samsonite in July 2007. The syndicate composition will no doubt be a disappointment to Bank of AmericaMerrill Lynch, which advised Samsonite at the time. 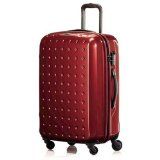 The appointment of RBS, a firm with comparatively more modest Asian ECM credentials, can be explained by the US$1.43 billion financing it provided for CVC’s buyout of Samsonite. In addition, RBS holds a minority stake that it acquired in a debt-to-equity swap in June 2009 when Samsonite was in danger of breaching its bank covenants.

What is perhaps surprising is the appointment of no fewer than five bookrunners to work on what is said to be only a US$1 billion IPO. This suggests that CVC has decided to play it safe, and also that there will be no public offering without listing (POWL) in Japan, as there has been in other recent sizable ECM deals in Asia.

The appointment of the lead banks follows the engagement earlier of a firm of independent advisers to keep the underwriters honest.

CVC met with both STJ Advisors and Rothschild before settling on Richard Orders’ Asia Pacific Advisers. APA has experience and a substantial presence in Hong Kong, where, among other deals, it worked on the proposed US$2.7 billion IPO of Swire Properties. That deal was shelved in May 2010, at the height of the Greek financial crisis.

APA’s appointment suggests that that the IPO will be conducted in Hong Kong, rather than in Singapore as has been rumored. APA may also have benefited from its acquisition by high-profile US financial advisory house Moelis & Co, announced at the end of January.

Luxembourg-incorporated Samsonite, which has more than 40% of its points of sale in the fast-growing Asia region, is part of a growing list of corporates eager to capitalize on the opening up of Hong Kong’s active ECM markets to non-Chinese issuers.

CVC will, however, be primarily motivated by valuation considerations. It initially paid US$1.7 billion for Samsonite, including the assumption of debt, back in 2007, coughing up another US$175 million in 2009 as part of the debt restructuring exercise. Assuming that CVC offloads the customary 25% in the IPO, a US$1 billion offering would imply a valuation of perhaps up to $4 billion for Samsonite, though that could be lower if CVC plans to sell more of its stake.

Market watchers will now eagerly await further news on the proposed IPO of Swiss commodities broker Glencore International AG, which is set to be one of the largest in Hong Kong in 2011, following a successful US$2.2 billion going-public convertible bond issue in December 2009.

(Philippe Espinasse worked as an investment banker in the U.S., Europe and Asia for more than 19 years and now writes and works as an independent consultant in Hong Kong. Visit his website at http://www.ipo-book.com. Readers should be aware that Philippe may own securities related to companies he writes about, may act as a consultant to companies he mentions and may know individuals cited in his articles. To comment on this column, please email [email protected]).

[This article was originally published on Dow Jones Investment Banker on 23 February 2011 and is reproduced with permission. It also appeared on WSJ.com, the website of The Wall Street Journal].