I was back in RTHK 3’s Admiralty studio this morning for a live radio interview in the “Money for Nothing” programme, hosted by anchor Bryan Curtis.

Also on the show today were Richard Harris, Chief Executive of Port Shelter Investment Management, who talked about financial markets more generally, and Alexandra Tracy, Chairman of the Board of ASRIA, who discussed ethical and sustainable investment.

A number of bank IPOs from China’s mainland are set to come to Kong Kong. These include offerings by Bank of Chongqing, for just below US$600 million equivalent and which prices today, and Huishang Bank, for up to US$1.3 billion – the largest bank IPO in Hong Kong since 2010 – which is set to price on 6 November. Also in the wings are the possible flotations of China Cinda Asset Management (US$2 billion), China Everbright Bank (US$3-4 billion), Harbin Bank (US$1 billion), Bank of Shanghai (US$2 billion), and China Guangfa Bank – formerly known as Guangdong Development Bank – for up to US$4 billion. 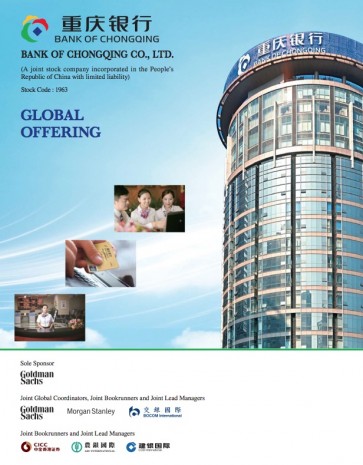 A number of these deals have been in preparation for a considerable amount of time. For example it has been stop-and-go several times for the Everbright Bank IPO over the last few years. With the mainland markets still in limbo, these financial institutions are turning to Hong Kong in an attempt to replenish their balance sheets.

While Chongqing and Huishang are said to be more specialized financial institutions as compared to more mainstream lenders – and therefore reasonably healthy – some of these banks are likely to have been impacted by NPLs, may face capital shortages or, on the asset side, will have suffered from the recent volatility in the fixed income markets. The main incentive for investors to buy these stocks is that they are generally offered at reasonably attractive valuations, even if at a slight premium to other Hong Kong-listed second tier banks: for example, at below prospective book value for the Huishang Bank deal, as is also the case for Chongqing. In addition, there’s frankly little else to buy in terms of sizeable IPOs in Hong Kong right now. Institutions can’t afford to remain invested in cash – and have to put their money to work somehow.

At this juncture, there seems to be a bit more momentum for new listings in Hong Kong. Huishan Dairy, which was the second largest IPO there this year (US$1.3 billion) after that of Sinopec Engineering, recovered rather quickly above the offer price after a disappointing start. The Bank of Chongqing IPO was reportedly covered on the first day of bookbuilding. But we are not yet seeing blowout demand from the Hong Kong public for these deals, and the participation of cornerstone investors generally remains a very important factor for their success. Hong Kong tycoons (something we had not seen for a rather long time) and corporates came in for reasonably large amounts into the Huishang Bank and Bank of Chongqing IPOs as cornerstones.

However, major international institutional investors and sovereign wealth funds, with the notable exception of Norges Bank in the Huishan Dairy IPO, are still largely conspicuous by their absence. So to a large extent it’s still Chinese money buying Chinese deals and it likely will require a sustained change in sentiment, or new lock-up rules for this to evolve.

Indeed, Hong Kong remains the only major market in Asia that imposes a strict six month lock-up on cornerstone investors. The result is that bona fide institutions, whose role it is to invest in, and trade shares, now shun the guaranteed allocations offered by cornerstone tickets in Hong Kong and prefer instead to buy either during bookbuilding or in the aftermarket. By and large, with a handful of exceptions, the only cornerstone investors one finds for IPOs on HKEx are Chinese corporates. They enable deals to get done but do not help with aftermarket trading. Their participation also creates an overhang on share prices for newly listed companies, as the market expects these accounts to dump their holdings as soon as their six month lock-ups expire.

As reported in the International Financing Review on 26 October, the Financial Services Development Council, a think tank set up in 2013 to advise Hong Kong Chief Executive Leung Chun-ying, is currently looking at recommendations to revive the city’s ailing IPO market, including, possibly, changes to the rules on cornerstone investors. It will be interesting to see what it comes up with.

Meanwhile, the ridiculous practice of appointing a wide array of bookrunners on every Chinese IPO in the city continues unabated. Commercial real estate developer Hydoo International secured not less than seven for its US$212 million new listing (excluding a 10% Greenshoe): UBS and Morgan Stanley (who also acted as joint sponsors and joint global coordinators), as well as Agricultural Bank of China International, CIMB, China Merchants Securities, ICBC International and BOCOM International. With gross fees of only 2% (which were also not payable on shares subscribed for by the cornerstone investors – more than 61% of the deal and all individuals or corporates – and other excluded investors as stated in the underwriting section of the prospectus), there can’t have been that much in the pot for houses other than UBS and Morgan Stanley, who were separately paid an aggregate of US$3 million for sponsoring the deal.

To hear a podcast of my interview on RTHK 3, please click HERE.

Separately, I was quoted today in an article by Bloomberg’s Fox Hu on the Huishang Bank IPO. To read the article, please click on this LINK.