The last quarter was all about block trades, placements and accelerated bookbuildings. No fewer than 92 accelerated offerings were completed, raising a total of US$20.6 billion, an increase of 23% from the US$16.8 billion placed in the same period in 2012, but down 16% as compared to the fourth quarter last year. Accelerated offerings accounted for 41% of the Asia-Pacific ex-Japan ECM volume in 1Q 2013. 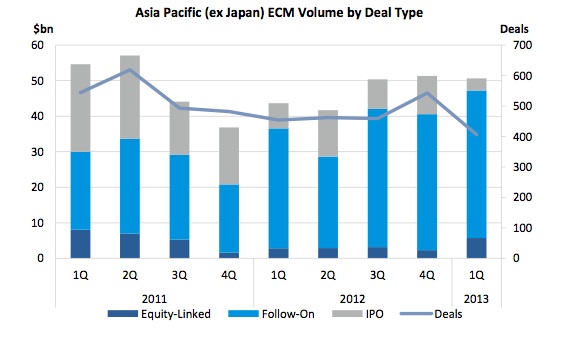 REIT listings in the region raised US$3.3 billion through 15 offerings in the quarter, an increase of 31% over last year’s first quarter and the highest quarterly average since 2Q 2011 (US$3.5 billion, 10 deals).

Overall, we are yet to see significant volumes of large transactions. The average deal size in the region was only US$126 million in 1Q 2013, up 31% as compared to last year (US$96 million). Five of the 13 US$1 billion plus transactions in the quarter were from Chinese issuers. The largest of these was a US$3.8 billion follow-on offering by ICBC on 9 January 2013.

Of the 91 ECM deals priced by Chinese issuers in the quarter, 43 took place on the mainland’s exchanges of Shanghai and Shenzhen, down from 64 deals in 1Q 2012. Chinese issuers in Hong Kong completed 41 deals, the highest quarterly count for almost two years. Again, most of these were block trades. 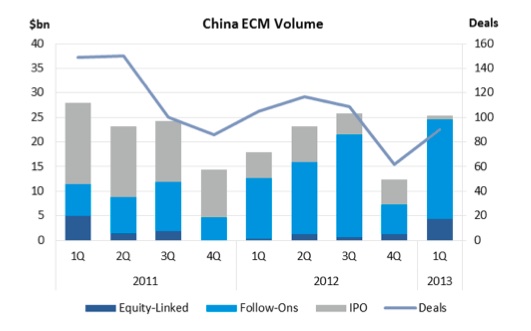 Equity-linked issuance totaled US$5.7 billion via 16 offerings, nearly double the amount raised in the same period last year (US$2.9 billion).

Overall, sentiment towards IPOs and transactions that are marketed over an extended period of time remains subdued, most particularly in North Asia. Southeast Asia (Singapore, Malaysia, Thailand, The Philippines, Indonesia) will probably continue to carry most of the ECM momentum in the region for now, although volumes should dip sharply in Malaysia in particular, pending the outcome of the general elections which should follow the dissolution of parliament announced yesterday.