The London Stock Exchange (the LSE) announced Wednesday an agreement to buy TMX Group Inc., the parent company of the Toronto Stock Exchange (the TSX) in a fairly even US$3.2 billion, 55/45 share- swap. This was swiftly followed by news that Deutsche Boerse, the group that controls the Frankfurt Stock Exchange, was making an all-share offer for NYSE Euronext, with a view to controlling around 60% of the combined entity.

Both deals come as the Singapore Exchange Ltd. (the SGX) and the Australian Securities Exchange (the ASX) are progressing with their own merger. This, and the proposed TMX-LSE deal, means that bankers who specialize in natural resources can soon focus on two major pools of liquidity.

Deal-making among stock exchanges is nothing new. In 2007, the New York Stock Exchange merged with France’s Euronext to form NYSE Euronext, an exchange that now operates across New York, Paris, Amsterdam, Brussels, Lisbon and London. The LSE itself was previously the target of multiple acquisition attempts, including by Deutsche Boerse, Euronext, NASDAQ OMX Group – and even Australia’s Macquarie Group.

However, previous mergers have actually yielded few concrete benefits for bookrunners of ECM transactions. While NYSE Euronext and the Securities and Exchange Commission in the US are gradually accepting the use of IFRS accounting by issuers, and non-EU companies listed in the US enjoy a “fast path” option of using their SEC documentation to gain listing admission to NYSE Euronext in Europe, the US and European sides of the combination have continued to be largely run (and regulated) separately.

Indeed, despite the tie-up, de-listings by European issuers from the NYSE have continued unabated, with companies such as France’s AXA SA, Greece’s Hellenic Telecommunications Organization SA and Germany’s Allianz SE, Daimler AG and Deutsche Telekom all recently calling it a day, as the demanding disclosure requirements of the Sarbanes-Oxley legislation and low trading levels achieved in the US took their toll.

The LSE/TMX combination (which includes the LSE-operated Borsa Italiana in Italy) may, however, offer a different, much more focused and attractive proposition to equity underwriters, most particularly with respect to companies in the metals, mining, natural resources and clean technology sectors.

According to Dealogic data, a total of US$246 billion has been raised by mining and energy companies since 2005 from the London, Toronto, Singapore and Australia stock exchanges together. 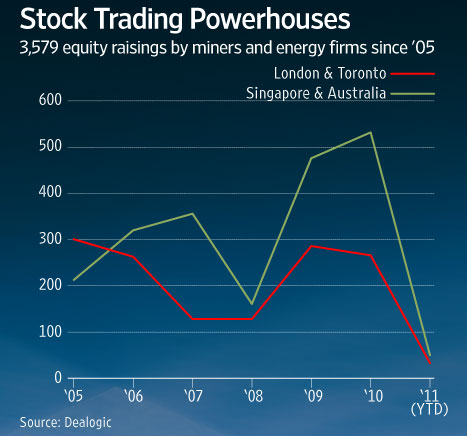 Issuers in those industries will therefore now increasingly focus on two distinct options for their IPOs, on what are platforms with a strong track record of listing, researching and trading related securities. Those incorporated and active in the Americas, Western Europe, the Middle East and Africa, and right through to Eastern Europe, Kazakhstan and Russia should seek listings on the LSE/TMX combination; while those based in Northeast (China, Mongolia) and Southeast Asia (and in Indonesia in particular), as well as in Australasia will be attracted by the SGX/ASX platform.

Aside from the obvious time-zone considerations, these hubs should be able to channel much-needed liquidity from, and active trading by, dedicated institutional investors running specialist sector funds, and also to offer both quality and extensive buy- and sell-side sector research coverage – even though broker pre-deal reports are currently not allowed in Canada. In addition, both the LSE and the SGX readily offer trading in depositary receipts, which may prove attractive to investors as many potential issuers from the resources sectors are located in emerging markets, with much volatility, or indeed in some cases restrictions or controls affecting their currencies.

And while the mammoth Deutsche Boerse/NYSE Euronext deal may be too big to ignore, with a reported 28% global market share of the value of listed stocks, as well as with the attractive Clearstream settlement and custody and Eurex futures businesses thrown into the equation, the multiplicity of possible listing platforms and stock exchange regulators, as well as very real antitrust uncertainties surrounding the proposed arrangement, may not make the threat so strong after all.

If anything, it will put pressure on the other declared candidates to complete their own mergers and acquisitions as soon as possible.

Speculation will probably also move to Tokyo and Hong Kong, two exchanges that have, despite their size and limited recent developments, so far largely relied on ECM deals by Japanese and Chinese issuers respectively and will now be under pressure to open up their platforms to the wider world.

[This article was originally published on Dow Jones Investment Banker on 11 February 2011 and is reproduced with permission].