HONG KONG (Dow Jones Investment Banker) – Singapore-listed Noble Group Ltd. likes to point out that its net book value has grown at a compound annual rate of 27% since its listing in 1997. However, it is currently trading on a price-to-book multiple of only 1.47x and a forward P/E below 10x, well below comparables. The proposed listing of its sizable and profitable agricultural business in Singapore, on which JPMorgan is advising, should be accretive for the group and result in a re-rating.

Noble Group is a global bulk commodity supply chain manager that operates across a multitude of products, locations and customers. Last year, it generated revenue of US$56.7 billion and Ebitda of US$1.2 billion. With its headquarters in Hong Kong, the group – which reports its financials in US dollars – is listed on Singapore’s SGX, where it has a market capitalization of US$6.9 billion equivalent, down from US$11.3 billion last April.

Noble Group’s long-term strategic focus is on building low-cost sourcing capacity for commodities (in Brazil, Argentina, Australia, and Indonesia, for example) and delivering these into high-demand growth markets, including China, India and the Middle East. One of its objectives is also to recycle capital through the sale of assets, strategic partnerships, joint ventures and IPOs, while securing control of the flow of goods. 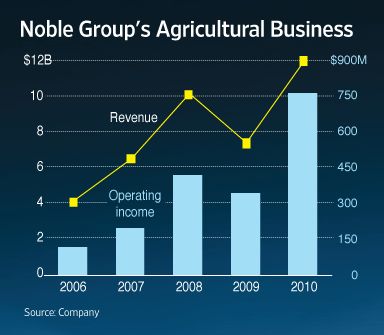 The proposed flotation of its agriculture business, whose new name is yet to be unveiled, fits neatly within this strategy.

The business focuses on the transport and process of agricultural commodities, specifically cocoa, coffee, cotton, fertilizers, grains and oilseeds and sugar in key locations. In 2010 it accounted for 21% of the group’s revenue (or more than US$12 billion) and 47% of its operating income, equivalent to more than US$761 million. That year, its operating margin was 6.3%, up from 4.7% in 2009 and the business experienced increased origination volumes, attributable in part to new investments in processing and infrastructure assets.

It’s a business that has made significant inroads in recent months. These have included the launch of a dry bulk grain terminal in Brazil, thanks to an investment of US$48 million, and of a US$200 million soybean crushing plant in Argentina. Other developments comprise the opening – in phases – of two sugar/ethanol plants in Brazil with a combined investment of US$672 million since 2007, and the proposed acquisition of two sugar mills, again in Brazil, to raise the company’s combined annual operating capacity to 17.5 million metric tons.

It’s unclear how much of Noble Group’s US$6.1 billion borrowings (of which US$4.5 billion represents net debt) will be reflected on a pro forma basis in the entity to be floated.

However, with agricultural commodities being seen as more stable than its industrial staples, and with SGX-listed competitors Olam International Ltd. and Wilmar International Ltd. trading on forward P/Es of 13.4x and 14.4x respectively, the proposed IPO should be accretive to Noble Group and its shareholders, and result in a re-rating of the parent.

The agricultural business could be valued at perhaps US$2.5 billion, and even the float of a minority stake should enable Noble Group to free up a considerable amount of capital, generate substantial proceeds, and, importantly, maintain its investment-grade ratings.

The market is already anticipating this, with a 9.2% increase in the share price over the last week.

The primary equity market is in the doldrums. The proposed listing is not imminent, however  – and, as we know, all noble things are as difficult as they are rare.

[This article was originally published on Dow Jones Investment Banker on 10 October 2011 and is reproduced with permission.]