HONG KONG (Dow Jones Investment Banker) – Richard Li appears again to be following in his father’s footsteps. Hong Kong’s richest man, Li Ka-shing, just spun off the container port assets of Hutchison Whampoa Ltd. as a business trust on Singapore’s SGX in the world’s largest IPO so far this year. Now PCCW Ltd., in which the younger Li holds a 27.1% stake, is considering a similar listing in Hong Kong for its telecommunications arm, which accounts for about 90% of PCCW’s business.

It’s easy to see the draw of a spinoff from Richard Li’s perspective. It is less clear whether it makes sense for PCCW’s long-suffering shareholders. He will also need to persuade the Stock Exchange of Hong Kong and the regulator there that they should allow such entities to list. 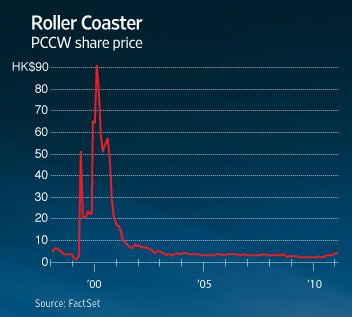 PCCW’s announcement March 21 about the possible listing of a business trust appears to have been well received by the market, with PCCW’s share price surging almost 4.6% on the news, following a 5.5% increase the previous day – the highest two-day increase in well over a year.

The move is the latest twist in a decade-long saga. Shareholders are still nursing their losses from the group’s merger with Cable & Wireless HKT back in 2000, and Li has been working for most of the decade since to find a long-term solution to PCCW’s sorrows. Macquarie Group’s and TPG Newbridge’s attempts to buy its telecommunications and media assets were rebuffed by Beijing in 2006. Other sale proposals later that year and in 2008 were also unsuccessful, and an offer to take the company private was finally ruled out by the Court of Appeal in 2009.

A spinoff through a business trust might be a neat way to raise equity while retaining control over operations and management – and receiving base and performance fees.

A business trust is broadly similar to a real estate investment trust (REIT), with a few tweaks. While REITs are limited to property only, a variety of assets can be bundled into business trusts, from shipping to infrastructure to telecoms and media concerns. Shareholders hold units in the trust, which is operated by a trustee-manager, usually related to the sponsor. Unlike REITs, business trusts are not subject to limitations on their gearing, so issuers potentially can manufacture higher payouts, above and beyond the naked yield.

Even though the EBITDA margin for its telecoms business has eroded, PCCW, which posted a 6% dividend yield in 2009, would appear to be textbook business trust material. The fact that Macquarie – well-known for packaging both listed and wholesale yield-based funds – made an offer for the unit speaks volumes about its ability to generate cash on a recurring basis. Macquarie has a record of structuring deals to keep a hold over listed assets, having once put in place a total return swap in connection with the IPO of a mutual fund company on the SGX.

It may not be all smooth sailing for PCCW, though. Hutchison’s HPH Trust, which just listed in a US$5.45 billion IPO in Singapore, is off to a poor start, despite an annualized 2011 yield of 5.85%. The unit price closed 6% down on the first day of trading, and Deutsche Bank bought back more than $100 million of stock in three days, eating into the greenshoe to try to stabilize the stock, according to filings made with the SGX.

Well-known activist David Webb, a member of Hong Kong’s Takeovers and Mergers Panel, has also been a vocal critic of the HPH Trust IPO, saying that “it would be a loss if Hong Kong were to lower its standards to attract such business.” In a column on his website on January 21, Webb argued that it would be virtually impossible for the HPH Trust’s unitholders to remove the trustee-manager and that the structure effectively enables Hutchison Whampoa, despite a minority shareholding, to retain control of the operations, as well as receiving fee income.

And, of course, there is the small matter that business trusts are not currently allowed in Hong Kong, even though the exchange there, no doubt unnerved by Hutchison’s decision to choose the rival Lion City for its flotation, will be keen to catch up, and is said to be actively studying the possibility of listing trusts. The regulator, the Securities and Futures Commission, will also be having a close look, given the issues about control raised by Webb and others.

Meanwhile, brokers have been busy making calls – and that can only be good for Mr. Li’s business.

[This article was originally published on Dow Jones Investment Banker on 23 March 2011 and is reproduced with permission. It also appeared on WSJ.com, the website of The Wall Street Journal].