HONG KONG (Dow Jones Investment Banker) – The Stock Exchange of Hong Kong (HKEx) is reportedly trying to woo Spain’s Inditex to list in Asia, as part of an international marketing roadshow in Europe in November. Such a move would make little sense if what is suggested is a secondary listing. But a spin-off in Hong Kong of the group’s fast-growing regional operations could be an attractive move.

Industria de Diseño Textile SA (or Inditex), established as a manufacturer in La Coruña in 1975, is now one of the world’s largest fashion retailers. It operates a multi-concept platform through eight store formats, including Zara (which accounts for 65% of turnover), Pull & Bear and Massimo Dutti. Its network now totals more than 5,220 stores in 78 countries and 400 cities across Europe, the Americas, Asia and Africa.

Very much a Spanish – but also a truly global – success story, Inditex has a unique business model, based on innovation and flexibility. It now churns out some 36,000 new designs every year: those which make it to production are then selected by local managers, who have discretion over what to stock according to regional and seasonal trends. These are delivered to stores between two and six times per week, out of a centralized distribution platform. Creativity, quality of design and rapid turnaround to adjust to market demands lie at the heart of what entices customers.

A secondary listing of the group in Hong Kong probably wouldn’t achieve much, despite a register currently dominated by U.S. and European institutions. Quoted in Madrid, Inditex is already researched by no fewer than 58 analysts. And, as calculated over the last 30 days by FactSet, the stock’s average daily trading volume (ADTV) was almost US$500 million. Its share price one-year return is 18.3% too, clearly outperforming Spain’s IBEX 35 index. The company also trades at a respectable forward P/E of just below 22x.

And it’s doubtful there would be much upside if Inditex were to issue or sell shares in connection with a listing on HKEx. The company is ungeared, so has no need for further equity capital. The precedent created by the only European company – and a very large one to boot – to have issued shares in connection with a dual listing in Hong Kong, Glencore International SA, is hardly encouraging. ADTV for its shares hovers around the US$4 million mark in Hong Kong, compared with more than five times that amount on the London Stock Exchange.

Inditex has earmarked Asia as one of its key growth areas. It now operates 343 stores across nine countries there, of which 214 are under the Zara label. 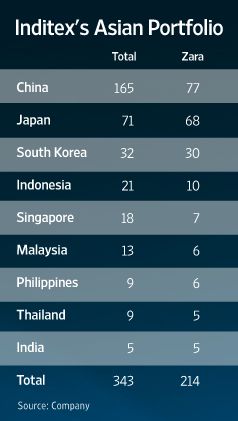 Its key market is China, where it opened in major first-tier cities in 2006, including Beijing, Hong Kong, Macau and Shanghai. 2007 saw expansion into urban centers of more than 5 million inhabitants, followed by the over-2.5 million band in 2009, achieving a presence in some 30 cities as at December 31, 2010. The group now plans to have stores in 42 Chinese cities by the end of this year.

India, which Inditex has only just penetrated, is also set for significant expansion, with recent store openings in Delhi, Mumbai, Bangalore and Pune.

A spin-off of Inditex’s Asian operations through an IPO in Hong Kong could make sense. It would create a platform to help fund its fast-paced growth and – possibly – acquisitions (perhaps of suppliers or manufacturers) in the region, while enabling chairman and founder Amancio Ortega Gaona and family shareholders to continue to remain firmly in control as the group’s free float exceeds 40%.

This could be a sizeable deal too. In its accounts, Inditex bundles its Asian platform with stores in the Middle East, which, together, represented some US$2.6 billion or 15% of global sales in 2010. With approximately half of that segment comprised of stores in Asia, this could hint at revenue in the region of perhaps US$1.3 billion. Assuming a net margin of 12% – slightly below that for the group as a whole -and a conservativ e P/E of 25x, which would make for an accretive arbitrage, Inditex Asia could perhaps achieve a fully distributed equity valuation of around US$4 billion.

That should give CEO Pablo Isla Álvarez de Tejera some food for thought. And he knows a thing or two about equity capital markets, having led a wave of Spanish privatizations during the 1990s.

[This article was originally published on Dow Jones Investment Banker on 1 November 2011 and is reproduced with permission.]