HONG KONG (Dow Jones Investment Banker) – In sharp contrast to most other IPOs in Hong Kong this year, and as smaller competitor Beijing Jingkelong Co Ltd has just had its application for a listing in Shanghai rejected by China’s Securities Regulatory Commission (CSRC), mainland hypermarket operator Sun Art Retail Group Limited has posted a 26% gain since its US$1.1 billion IPO last July. Nine blue-chip cornerstone investors came in at the time of the offering for a combined US$420 million. Some of these may now perhaps consider exiting, and locking in capital gains after the expiry of their lock-ups early next year. We look at the stock’s valuation and liquidity, and at which firms might best be positioned to print a trade.

Sun Art, which is jointly owned by France’s Groupe Auchan and Taiwan’s Ruentex Development Co Ltd and Ruentex Industries Ltd, is one of the fastest-growing food retailers on the Chinese mainland, with a market share of 12% in 2010 according to Euromonitor.

Its IPO was a resounding success, with the institutional placement 15 times subscribed. And unlike most IPOs in Hong Kong this year, demand under the public offer was also reasonably strong, with the 10% initial tranche 41 times subscribed, triggering a claw-back that increased the final size of the retail portion of the deal to 20%.

Some 40% of the IPO was allocated to nine cornerstone investors, which committed in advance to buying shares at the offer price. These included sovereign wealth funds Government of Singapore Investment Corporation (GIC) and a subsidiary of Malaysia’s Khazanah Nasional Berhad, together with an affiliate of Bain Capital LLC, French asset management firm Carmignac Gestion, and others. 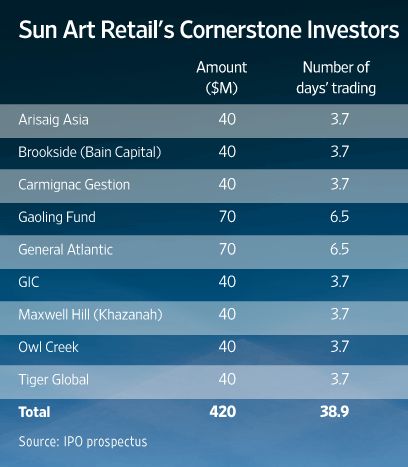 On a forward P/E basis, Sun Art currently trades at a significant premium to comparables, which include China Resources Enterprises Ltd (CRE), Jingkelong, Lianhua Supermarket Holdings Co Ltd and Wumar t Stores Inc. On a forward EV/Ebitda basis, its value generally remains at a premium too.

The company’s high valuation is partly a function of its size and wide footprint, but also its strong cash- generating capacity, with an Ebitda margin ahead of the other retailers. It also benefits from a dual-banner model with stores under the Auchan and RT-Mart names, and from advanced technology systems. The stock exhibits good liquidity too, with a 30-day average daily trading volume in excess of US$10 million. 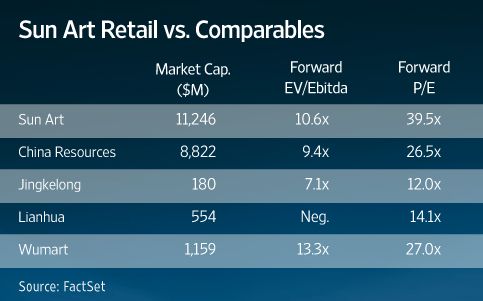 The cornerstone investors are all effectively locked up until January 30 2012, the first trading day after the Chinese New Year week, which runs from January 23 to 25. Although their individual stakes only represent a few days’ trading, it’s possible that several of these accounts might want to lock in capital gains, in light of the strong performance of the stock – and of this year’s poor showing by Hong Kong equities.

In such a case, the exercise ought best be coordinated and, assuming Sun Art’s financials post strong gains, as they did with the June numbers (with consensus year-end earnings currently forecast to grow more than 20%), it should ideally be conducted just after the announcement of Sun Art’s year-end results. The company doesn’t provide a date for that event yet, although the interim accounts were communicated exactly two months after June 30, which should give plenty of time to ECM bankers to make their rounds with pitch books, and win mandates to execute a deal.

The obvious candidates to lead the transaction would include HSBC, UBS and Citigroup, who were the IPO joint bookrunners, alongside BNP Paribas, China International Capital Corporation Limited, and Goldman Sachs.

But Morgan Stanley, who was also part of the bookrunner group, has a strong track record in block trades in Hong Kong and Asia – and an “equalweight” rating on the stock, which it sees as a “solid, defensive name in a choppy market” – could perhaps be the one to watch.

[This article was originally published on Dow Jones Investment Banker on 18 October 2011 and is reproduced with permission.]