HONG KONG (Dow Jones Banking Intelligence) – Despite a significant pipeline of deals, at this stage in the year ECM transactions in Asia remain very much characterized by binary outcomes. Large, eye- catching offerings generate significant amounts of investor demand, while less obvious – and perhaps more challenging – transactions (when they close) have posted poor returns for investors.

Take last week’s placement by America International Group Inc. of a 14% stake in AIA Group Ltd. in Hong Kong through bookrunners Deutsche Bank, Goldman Sachs, Citi and Morgan Stanley. The deal was not without challenges. At US$6 billion, it represented a whopping 70-plus days of trading. But it’s not every day that investors get the opportunity to secure sizeable chunks in a constituent of the Hang Seng index, and at a markdown to boot. This enabled the accelerated offering to be completed in just 24 hours, and at a discount of 7% (the wider end of the indicative range of HK$27.15 to HK$27.50 per share) to the closing price on March 2. By all accounts the deal was well received and, at the time of writing, the stock was trading at a healthy 0.7% above the placement price.

Other recent ECM deals in Asia haven’t been so successful.

The IPO in Hong Kong of Chinese steel producer Xiwang Special Steel Company Limited, which raised net proceeds of US$127 million equivalent, nosedived on its first day of trading, despite pricing at the bottom of its range. The share price is currently more than 17% below water. A narrow distribution base, and an investment case with few distinctive characteristics that justified an extremely low, single-digit P/E, are probably the reason for this.

And despite a sizeable cornerstone investor component, Canadian oil producer Sunshine Oilsands Ltd. had a similarly difficult debut, raising US$575 million. Like Xiwang, it also priced at the bottom of its IPO range, and is still in the red, now trading 4.5% below its offer price.

While all houses are currently sitting on a large number of new issue mandates, there actually isn’t that much yet to generate excitement even if, some say, the AIA block has instilled some degree of confidence back into market participants.

Many of the deals in the pipeline are actually transactions that failed to successfully launch last year and that are returning, perhaps with smaller and (one assumes) more attractively priced offerings. These include IPOs by broker Haitong Securities Co. Ltd., financial group China Everbright Bank Co. Ltd. and heavy machinery producer XCMG Construction Machinery Co. Ltd. Importantly, all of these names are already listed on mainland China exchanges, so these deals will be facing limitations on the levels of discount that can be offered to investors in Hong Kong and internationally. 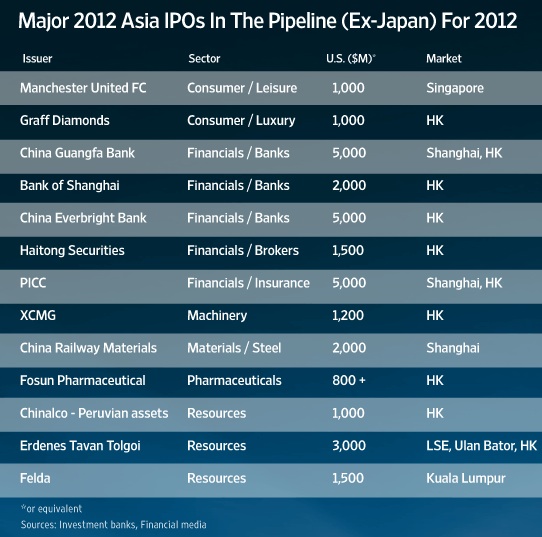 There are also a few international companies, or Chinese companies with predominantly international assets, that are attempting to list in Hong Kong. These include the UK’s Graff Diamonds and Chinalco’s Peruvian mining assets among other names.

In South East Asia, the Tesco Lotus Retail Growth Freehold & Leasehold Property Fund rather successfully raised – thanks to an attractive yield – US$600 million in Bangkok in what was the largest ne w listing there for six years. But there still isn’t much to immediately pop up on investors’ radar screens in the region, other than a few other REITs and, perhaps, the re-launch of Manchester United FC’s long-awaited IPO in Singapore.

So for now, the dearth of attractive, mid-market deals – sensibly priced, and by issuers with clear prospects – will continue to weigh on primary issuance. Investors meanwhile will have to put up with a diet of blue chip deals or dogs.

[This article was originally published on Dow Jones Banking Intelligence on 12 March 2012 and is reproduced with permission.]