I was interviewed by Sophie He from the China Daily’s Hong Kong edition for an article entitled “IPO’s second wind” as part of the newspaper’s Hong Kong Competitiveness report.

On May 22, state-owned brokerage China Galaxy Securities Co Ltd made its trading debut. It raised $1.07 billion through its Hong Kong initial public offering (IPO), the first listing to cross the billion-dollar mark in the city this year. China Galaxy Securities’ arrival along with Sinopec Engineering (Group) Co, the engineering arm of oil giant China Petrochemical Corp., were much-anticipated after an IPO drought which lasted months and knocked Hong Kong off its perch as the globe’s leading IPO location. Sinopec listed just 24 hours after China Galaxy. Its IPO raised $1.8 billion, the largest in Hong Kong since People’s Insurance Co. (Group) of China Ltd, raised $3.6 billion last December.

Hong Kong Exchanges & Clearing (HKEx) Chief Executive Charles Li told a Roundtable on May 23 that he was delighted to see the two big IPOs and that both were trading well. “We haven’t seen those (large IPOs) for quite a while. We already have a much larger public listing ceremony room, we just need more IPOs,” says Li, who added that he believes the market momentum generated by China Galaxy and Sinopec will extend into the second half of the year.

The two big deals in late May brought HKEx back to third place in the rankings of global exchanges in terms of IPO proceeds, following the New York Stock Exchange and Boves- pa Brasil Sao Paulo Stock Exchange. And not before time, either. Before the two deals, HKEx’s ranking had dropped to 13th, after ranking 9th, behind Singapore and Iraq at the end of the first quarter. 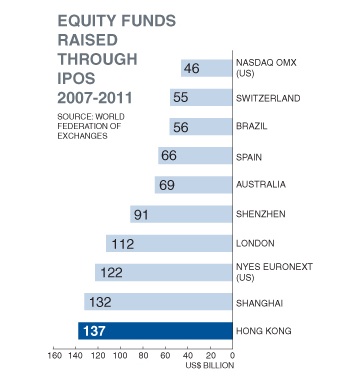 But can Hong Kong bolster its competitiveness going forward? Charles Li outlined the city’s IPO prospects at the beginning of the year: “Hong Kong has successfully secured the IPOs and listings of mainland companies over the last 20 years, which has also attracted unprecedented participation from international investors,” he said. “But, the city’s next big step on equity should be inviting Chinese domestic investors to come to Hong Kong, which will attract more international issuers over time.” This is the reverse of the city’s equity story over the last 20 years.

“To be frank,” Li tells China Daily six months later, “at the current stage, Hong Kong doesn’t have any core competitiveness in terms of an IPO center for large overseas companies like General Motors and Coca-Cola, as we don’t have anything to offer here that they couldn’t already get from New York or London.” His candor is value added. “At this point, it is meaningless to even try to persuade them (General Motors and Coca-Cola) to be listed in the city,” he says.

But that won’t stop him trying. Meantime, he stresses that Hong Kong is a desirable IPO launch pad for overseas companies whose businesses are related to China, or those who have customers in China, like Prada Group, along with several mining and resource companies. Such entities are willing to be listed in Hong Kong as the region’s investors understand China. More importantly, “the investors understand what the Chinese market means to the companies, which are more likely to get a good valuation here as their investors understand them,” Li says. He cites Prada as a case — or handbag — in point: “Only those investors who have witnessed long waiting lines outside of Prada’s retail stores in Hong Kong are willing to pay so much for shares of a company that makes handbags,” he says.

As of May 31, equity funds raised by 18 new listings in the city totaled HK$35.55 billion, a 38.2 percent year-on-year increase, says Edward Au, co-leader of the National Public Offering Group of Deloitte China. Au says mainland companies account for a significant part of Hong Kong’s IPO market. The growth of mainland GDP started to accelerate in the fourth quarter, and companies usually do better in an overall positive economic environment. Deloitte anticipates IPO proceeds in Hong Kong will reach about HK$50 billion by the end of this second quarter.

Au explains that every company which launched an IPO in Hong Kong between January and April this year had its shares priced toward the higher end of the offering range, and all issues were oversubscribed. Both cases indicate investor appetite is still strong. With daily turnover at HKEx between HK$50 billion and HK$60 billion, it is clear that the capital is still in the market, he adds. He also believes Hong Kong is holding steady as a desirable launch pad for IPOs. Au notes that costs in the city are lower than at rivals like the New York Stock Exchange, where underwriters’ commissions run as high as 7 percent of proceeds, while the commission rate in Hong Kong is only 3.5 percent to 4 percent.

Though it is correct to say that Hong Kong saw a reduction in both the number and volume of IPOs, the city’s standing as the principal fundraising hub for mainland companies continued to strengthen, says Au. During the first quarter, 11 companies were listed in Hong Kong. The companies raised HK$8.11 billion, in aggregate. Approximately 84 percent of IPO proceeds however, came from mainland companies (HK$6.82 billion), a 42 percent jump when compared with last year.

There have been numerous mega IPOs involving A-and H-shares, with the $22.1 billion IPO by the Agricultural Bank of China in July 2010 being the largest ever recorded. Thanks to these sizeable mainland listings, HKEx emerged as the top stock exchange in terms of IPO fundraising for three consecutive years from 2009 to 2011. HKEx also led the ranking for cumulative IPO funds raised from 2007 to 2011 with a global market share of 12 percent. 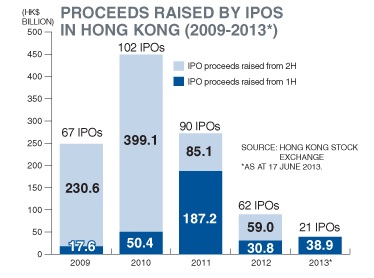 As at the end of April 2013, H-shares (shares of enterprises incorporated in the Chinese mainland and approved by the China Securities Regulatory Commission for listing in Hong Kong), Red chips (enterprises incorporated outside mainland China but controlled by Chinese entities) and mainland private enterprises, together, accounted for more than 47 percent of the companies listed on the exchange. They also accounted for more than 56 percent of the Hong Kong exchange’s market capitalization and 72 percent of its equity turnover value.

China Galaxy Securities tells China Daily that it considers Hong Kong an important springboard for mainland enterprises to “go global”. “China Galaxy Securities is committed to be one of the top international investment banks, our progress in internationalization and specialization will benefit from listing in Hong Kong,” a company spokesperson said as the reason it chose the city to launch its IPO. The brokerage also said that listing in Hong Kong not only enabled it to raise capital overseas, but will also help the company improve corporate governance and enhance internal operating mechanisms. Echoing China Galaxy, Sinopec Engineering also tells China Daily it chose Hong Kong for the city’s mature and diversified capital market with high-quality investors. “By listing in Hong Kong, the company’s international reputation is enhanced,” a spokesperson said.

Along with mainland firms, more foreign companies are hoping to list in Hong Kong. “For overseas issuers, listings in Hong Kong are a relatively recent phenomenon and have gener- ated mixed results, other than with the exception of L’Occitane, Prada and (to some extent) Samsonite” Philippe Espinasse, a former head of Asia equity capital markets and author of IPO: A Global Guide, tells China Daily.

Espinasse says that there was a major effort to promote listings in Hong Kong to international companies in 2010 and 2011. That held especially true for luxury goods and fashion companies, partly because the IPO markets in the countries of origin were struggling at the time. “There was probably a bit of a herd mentality there too — and that experiment has now largely subsided. The reality is that Hong Kong remains a China-focused market or, as HKEx likes to put it, the gateway to the Chinese mainland,” he adds.

Other than the natural bond between Hong Kong and the mainland, Li points out that the city’s competitive strengths also include: no foreign-exchange controls or withholding taxes; fair, open, transparent and highly liquid financial markets with active retail and institutional investor participation; the rule of law; as well as a vast pool of talented, experienced professionals in the accounting, banking, fund management, investment banking, legal and other professional sectors.

But although Hong Kong already has many advantages as an IPO center, it can always improve.

“Market practice with respect to cornerstone investors in Hong Kong is one area where things could be improved significantly,” says Espinasse. The requirement for a six month lock-up (a period immediately after a company has gone public when insiders and/or large shareholders are contractually forbidden to sell any of their shares), while a good idea in theory, greatly impedes the willingness of major, bona fide institutional investors to commit to cornerstone roles. It creates difficulties for them obtaining acceptance from their investment committees, he explains.

“As a result, most IPOs in Hong Kong either have no cornerstone investors, or secure commitments largely from SOEs from the mainland or from other corporates, who are obviously not major potential buyers of stock in the aftermarket.” These deals get done but often trade down because no pent up demand has been created. By contrast, Singapore or Malaysia have a flexible and even creative approach to cornerstone commitments, says Espinasse.

He also points out that Hong Kong has a pretty heavy process for secondary listings — in contrast to other exchanges, It also requires a rather late publication (in effect only a partial pre-publication) of the entire prospectus, which creates asymmetries of information between what is available to institutions and to the public. Again Singapore and Malaysia probably have got it right there, he advanced.

HKEx says in future it will focus on market quality in the belief that quality will establish a cycle attracting liquidity, then quality issuers. It is also working hard to ensure there are no barriers to overseas companies seeking to list in Hong Kong. For instance,the exchange expanded its international listing base further by accepting more overseas jurisdictions as places of incorporation for listed issuers, bringing the total number of recognized jurisdictions to 21.

HKEx will continue to organize listing promotion activities in the city, the Chinese mainland and selected overseas markets to help attract quality companies to list in Hong Kong. In accordance with HKEx’s 2013- 2015 strategic plan, the city’s stock exchange is focused on becoming a vertically and horizontally-integrated multi-asset class exchange. For Li, the prospects look bright. “Along with the enhancements of cross-border interoperability between the mainland and Hong Kong, the city’s competitiveness as an IPO center will also be enhanced,” says Li. “It is only by listing in Hong Kong, that overseas companies can get access to wealthy mainland investors.”

And Hong Kong access to the ultimate prize. “By that time, HKEx will go out and pitch companies like General Motors and Coca-Cola,” says Li.