I was back in CNBC’s Hong Kong studio this morning for live interviews with anchors Emily Chan and Oriel Morrison to comment on local IPOs.

A video of the interviews can be found by clicking on this LINK. Please note that I come on air after 1’30 of this 7’14 segment. This is also posted on CNBC’s top video page, in addition to their Asia video tab. 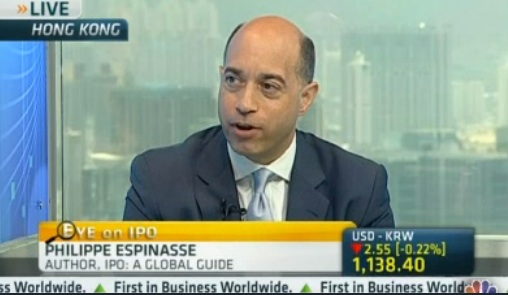 Throughout the interviews, I developed three themes, as follows:

The bulk of primary equity issuance in Hong Kong so far this year has therefore been through placements and block trades, with very few sizeable new listings. Only two have raised more than US$1 billion (Sinopec Engineering and China Galaxy Securities), with the third largest IPO (Chinalco Mining) only raising US$410 million.

IPOs down due to macro factors, threats of rising interest rates

One reason for the dearth of IPO in Hong Kong is macro economic factors. Concerns about the end of quantitative easing and easy money in the US is one explanation – it has certainly negatively impacted the business trust deals, which formed a significant component of the pipeline of IPOs in the first half (Langham is down 20% since its IPO, Hopewell was pulled and New World was pulled and then cut in size).

Credit has also been in very tight supply and this has also had a knock-on effect on investor confidence (according to research by Credit Suisse, excluding Japan, bond issues in Asia in June totaled less than US$600 million, as compared to US$15 billion plus in each of the previous three months).

The main reason for the low IPO volumes in Hong Kong is however probably to be found in lingering concerns about a slowing Chinese economy and, above all, in the poor performance of those IPOs that have actually made it to closing (Chinalco is down 22%, China Galaxy is trading 11% below its offer price and Sinopec Engineering is 1% below water). 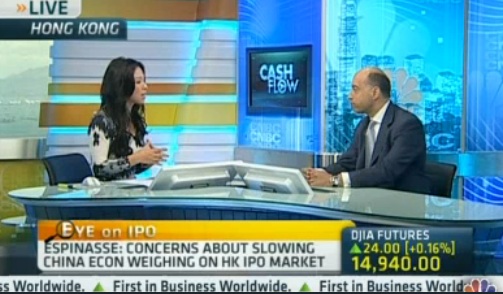 Due to the low levels of issuance, there has been increasing competition among investment banks to be appointed as a global coordinator of bookrunner of any fairly sizeable transaction. At the same time, issuers find it reassuring to have more banks lead their offerings. But things have really gone overboard: China Galaxy Securities had 21 bookrunners on its US$1 billion IPO, Sinopec Engineering had 13 for a US$1.8 billion new listing. The fee pool remains the same so these offerings are probably actually not even that profitable for the banks involved. There is also little coordination and a lot of confusion in the messages that are disseminated to investors, with the consequence that many of these accounts either look elsewhere (for example, in South East Asia) or prefer to see how these deals trade in the aftermarket before buying the stock.

The quality of the books of demand for these transactions has consequently been eroded, also in no small measure because of the requirement in Hong Kong that cornerstone investors (i.e. large institutions that commit to buying large, early allocations at the offer price) be locked up for six months – something that is not done (or not to such an extent) in Malaysia or Singapore. The IPO markets in South East Asia, including Thailand, Indonesia, the Philippines, Singapore and Malaysia – in the later case less so because of the general elections there in the first half – have actually been much more active than that in Hong Kong, where large deals have only made it to the finish line because of the significant participation of corporates and State-owned enterprises, clearly not natural buyers of stock in the aftermarket.

Ultimately what’s needed is for several eye catching transactions to trade well – and for investors to make money on these. All eyes are on the forthcoming, multi-billion dollar IPO of Alibaba but, in the meantime, other offerings will probably need to be cut in size (as for New World and Macau Legend) and to post more attractive valuations to entice market participants.

Given the lack of investor demand and poor sentiment, we have also seen backdoor listings to secure access to capital markets in Hong Kong, in particular on the part of property developers. IPO supply however tends to follow cycles and to be in sync with the availability of quarterly financials – so I would expect new issue volume to probably pick up in September again.