HONG KONG (Dow Jones Investment Banker) – Shanghai-based Haitong Securities Co., Ltd. started bookbuilding Thursday for its Hong Kong IPO and listing, which could raise up to US$1.7 billion in a primary offering, excluding a 15% over-allotment option. The broker will no doubt aim to replicate October’s successful flotation of rival CITIC Securities Co. Ltd., whose stock is currently trading 4.7% above its initial offer price. But with weaker institutional support, Haitong’s IPO could face an uphill struggle in these choppy waters: The company has a smaller platform, lower market share in securities underwriting and a higher cost base than CITIC.

Haitong, established in the late 1980s and listed in Shanghai in 2007, is the only major securities firm founded in that era that remains in operation under the same brand and without having received government financial backing or being acquired by a rival.

The firm primarily focuses on securities and futures brokerage, investment banking, asset management, proprietary trading and direct investment. In 2010 Haitong achieved revenue of US$1.8 billion, the third- highest among Chinese securities firms, and made a profit of US$608 million.

Like CITIC Securities, it’s primarily a broker, with brokerage operations accounting for more than 56% of revenue in 2010. Investment banking represents less than 10%. The firm boasts strong capital adequacy ratios, but a botched US$260 million placement it led earlier this year for Jiangsu Zhongtian Technologies Co. Ltd. (when it ended up with a substantial portion of the deal on its books), and a quote from CEO of international operations Lin Yong on how keen he was to pay the levels of compensation required to hire top bankers from U.S. and European houses in Hong Kong, are unlikely to have gone down too well with investors. 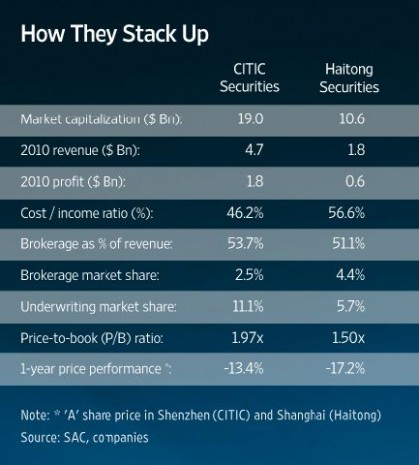 Haitong’s future growth will also rely on how it can make further inroads into the IPO market in Hong Kong. In addition, it stands to benefit from the internationalization of the yuan. Some 65% of the IPO proceeds have been earmarked for development of the broker’s operations on the mainland, with the balance set aside for M&A in the Asia-Pacific region.

The deal, which is led by Citigroup, Inc., Credit Suisse, Deutsche Bank, Haitong itself and JPMorgan as joint global coordinators with four other bookrunners, is being marketed at a bookbuilding price range equivalent to a p/b ratio of 1.17x to 1.32x, and a discount of 10% to 7% to the 20-day VWAP of Haitong’s ‘A’ share. CITIC Securities managed to attract six cornerstone investors to its $1.8 billion IPO, chipping in for a combined US$850 million. By contrast, Haitong has only secured anchor demand from two accounts and for only US$222 million – for a deal of a similar size.

The odds are that this could be a difficult offering, which may end up being priced at the bottom end of a revised price range, as was the case for CITIC Securities. The deal could even be re-sized if decent demand fails to materialize. There’s good momentum for IPOs in Hong Kong in the runup to the end of the year, but investors remain choosy, with valuations generally reasonable – and strong cornerstone support remains a must.

A look at key statistics suggests CITIC Securities to be the better firm. Its greater share of securities underwriting gives it an edge in the light of Chinese investors’ strong focus on primary equity, and IPOs in particular. The market already factors this into Haitong’s share price in Shanghai. But if the IPO is not covered very quickly, meeting that December 15 listing deadline could become tricky.

[This article was originally published on Dow Jones Investment Banker on 5 December 2011 and is reproduced with permission.]