I was interviewed by BBC News again, this time about the IPO of China Huishan Dairy Holdings, which at US$1.3 billion (pre Greenshoe) currently stands as the second largest IPO in Hong Kong in 2013, after that of Sinopec Engineering. The deal was also the largest consumer sector IPO in Asia since the flotation of Chow Tai Fook Jewellery (also in Hong Kong) in December 2011.

A link to a video of my (short) interview on the website of BBC News can be found HERE.

Huishan is one of the top three dairy companies in China alongside China Modern Dairy and Mengniu, both listed in Hong Kong, and whose share prices have done well over the last year. The company is also the most vertically integrated dairy company in China, with the largest upstream resources and the second largest herd of dairy cows in the country. It grows feeds (alfafa), owns processing facilities and manufactures and sells dairy products (including raw milk as well as liquid and powder milk products) to industrial and retail customers alike. Huishan has a trusted brand with good product safety records and premium product quality. Its 122,000 cows can be found across 50 dairy farms north-east of Beijing, not far from the north Korean border.

According to independent market research firm Frost & Sullivan (whose report is included in the prospectus published in connection with Huishan’s IPO), the dairy industry is expected to experience strong growth in China: sales should double between now and 2017 to reach some US$89 billion per year. The country’s per capita consumption rate of dairy products is also currently less than half that in other countries in Asia.

The company is controlled by entrepreneur Yang Kai, whose 50% stake is now worth some US$2.5 billion. Hero, an international consumer foods group based in Switzerland, owns about 4%, while other investors include Hong Kong tycoon Cheng Yu Tung. Huishan achieved a turnover of about US$416 million equivalent and a net profit of US$154 million in the financial year ended 31 March 2013. 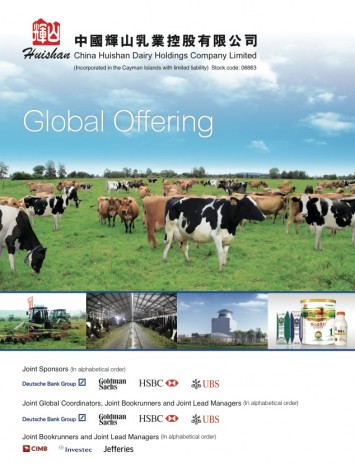 The IPO was largely for new money (76.9%), which is to be used to build new dairy farms, import cows from Australia and New Zealand, and to build a milk powder plant. The institutional tranche was said to have been more than five times covered, with orders received from some 300 institutions. The orders were booked as to about 78% in Asia but demand is said to have reflected a good spread of international investors, as well as from across the investor universe, including long-only funds (28%), hedge funds (41%) as well as corporate, private banking and high net worth accounts (21%). The quality of the institutional book was allegedly much higher than that seen for recent Chinese IPOs in Hong Kong, which have suffered from concerns about corporate governance issues in particular. The initial public offer (10% before claw-back, 15% post claw-back) was almost 13 times oversubscribed. The IPO was priced at the top end of the indicative price range at HK$2.67 per share, equivalent to a 2014 prospective P/E  of just below 17x, the highest P/E multiple for a Hong Kong IPO so far this year.

The transaction was no doubt successful in part because of an early sovereign wealth fund “momentum” order by Norges Bank (the central bank of Norway), a “needle mover” cornerstone investor that took a 2.5% stake in the company (equivalent to more than US$120 million). Two other cornerstone investors (Yili and COFCO PE) also subscribed for a combined US$90 million. With cornerstone accounts (all of which are locked-up for six months) only representing 16.4% of the base deal size, there should be plenty of liquidity in the counter in the initial trading months.

It is probably too early to say if this will be the deal that re-opens the Hong Kong IPO market. This is a large and attractive consumer and agricultural/food story with the backing of well-known names, while much of the IPO pipeline in the city still consists of issuers from the financial sector, chiefly, second tier banks from the mainland of China. Arguably, their investment cases will hardly be as exciting, with rising levels of non-performing loans, potential capital shortages, and investments hit by the volatility of the fixed-income market.

However, with Huishan’s stock down 5.2% at the opening and trading almost 9% below the IPO offer price within an hour (no doubt with one of  the lead banks also carrying out stabilizing trades) there will obviously be questions about the overall quality of the book of demand to justify pricing at the top end of the range, as well as whether sufficiently large aftermarket orders had been lined up to support the share price upon listing. While more than sufficient demand was clearly available to get the deal done, some of the key investors in the book were perhaps not scaled back enough to encourage them to top up their holdings, or had perhaps initially expressed price sensitivity during bookbuilding.

Key to improving IPO volumes and the performance of new issues in Hong Kong will therefore be the quality of companies coming to market, realistic offer sizes and fair pricing. The new regime for banks that sponsor IPOs in Hong Kong, which becomes effective on 1 October 2013, should, however, in theory result in better disclosure on the part of listing candidates, as well as in speedier and improved IPO execution.

Links to prior articles on Huishan Dairy can be found here: