HONG KONG (Dow Jones Investment Banker)–Hutchison Whampoa Ltd.’s retail division, one part of a sprawling conglomerate, is itself a mix of heterogeneous businesses. The best way to maximize its value would be to recognize that diversity with a partial float of its most attractive sub-segment, the Watsons health, beauty and pharmacy chain in Hong Kong and in the rest of Asia.

A Watsons float in Asia would rebalance the group’s portfolio toward its more profitable and (in theory) less volatile components, giving it a more cohesive and focused profile. At the same time, it would provide investors with direct exposure to a large, liquid and fast-growing business, with strong brand recognition and an extensive regional footprint, including some 1,900 stores and 1,200 pharmacy counters in 10 Asian markets. This comprises more than 550 stores in mainland China alone, in addition to Hong Kong, Macau, Taiwan, Malaysia — and beyond. 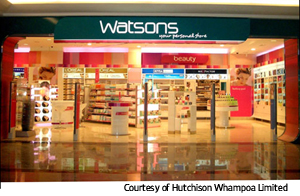 The group’s overall retail arm is a global player, with a forecast 2011 EBIT of about $1 billion, according to JP Morgan. Dating back to 1828, it has evolved into a health, beauty, food and wine and consumer electronics behemoth in both Europe and Asia. The group’s portfolio includes 12 brands in Europe and 10 in Asia, operating in 34 markets.

This includes a number of well-known names on both continents: from the Park n Shop supermarkets and Watsons convenience stores in Asia, to the Kruidvat and Trekpleister stores in the Benelux countries, and the Superdrug and Savers chains in the U.K.

While the retail arm contributes almost half of group revenues, it has the lowest EBIT margin of any division — excluding international telecommunications ventures and 3 Group — around 5%, compared to 34% to 50% for Hutchison’s ports, property and infrastructure businesses.

In fact, the margin levels at the retail division are low relative to those of other retail chains. But these margins partly reflect a number of assorted European businesses that have also suffered adverse currency moves. Viewed independently, the Watsons health, beauty and pharmacy assets in Hong Kong and other Asian countries would likely look much better.

Nearly all of Hutchison’s retail concerns, with the exception of some joint ventures in Eastern Europe and the duty-free stores in Hong Kong and Singapore, are currently wholly owned — so a partial float would leave the group in control.

Given recent news of the proposed listing of a yuan-denominated REIT in Hong Kong, potentially including Cheung Kong’s Oriental Plaza complex in Beijing, it looks like Hutchison Chairman Li Ka-shing is minded to monetizing some of his more attractive assets on the Mainland.

Better-rated specialty consumer chains such as Sa Sa International Holdings and L’Occitane International SA are trading at forecast PE ratios over 25, and EV/Ebitda ratios in the mid to high teens. Separating Watsons Asia from other members of the retail portfolio could therefore be a profitable exercise in multiple arbitrage, even after allowing for a material IPO discount.

Watsons Asia would also establish a very clean vehicle, immune to the current weak consumer sentiment in Europe, the volatility of the euro, the more subdued performance of Nuance-Watson’s operations at Chek Lap Kok airport in Hong Kong, and the issues that have dogged the group’s Marionnaud luxury perfumery and cosmetics network.

And if nothing else, such a deal would bring another hot, billion-dollar IPO to Hong Kong, with queues of applicants outside bank branches keen to partake in Mr. Li’s riches.

[This article was originally published on Dow Jones Investment Banker on 4 January 2011 and is reproduced with permission. It also appeared on WSJ.com, the website of The Wall Street Journal]