HONG KONG (Dow Jones Investment Banker) -Bursa Malaysia’s new rules are hardly game changing, but should be seen against the background of other positive developments in Malaysia’s capital markets.

The Kuala Lumpur stock exchange announced January 3 a public consultation heralded as transformational and as the first major revamp of its rules since demutualization in 2004. The proposed changes address a number of areas, from increasing the powers of the exchange to the admission, obligations and governance of market participants.

While the new rules cut through red tape and will improve the exchange’s standing in the region, they are hardly revolutionary. However, they should be seen in context.

Daily equity trading volume on Bursa Malaysia stands on average at less than half of Singapore’s US$1.55 billion, and is far behind volumes on larger platforms in Asia such as Tokyo and Hong Kong. And while 634 companies are listed on the main board, the number of new listings hasn’t yet returned to the 40 achieved in 1996, with only seven in 2008, 12 in 2009 and 23 in 2010.

Political uncertainty in Malaysia, with general elections widely expected to be called before the end of the federal government’s mandate in March 2013, has also steered foreign investors towards more attractive plays on domestic consumption, including in the Philippines and Indonesia, whose lead indexes grew by 38% and 42% respectively in 2010, as compared with only 18% for Malaysia’s FTSE Bursa Malaysia KLCI index.

Most capital markets transactions in Malaysia are largely subscribed domestically, and international institutional money is not as prevalent as in other markets. In addition, there are still too few listed stocks there with international appeal, and, in practice, many remain effectively tightly held by a narrow investor base. The larger deals have also been issues or spin-offs by a handful of conglomerates or state-owned enterprises.

However, regulations in Malaysia are actually both comprehensive and practical as compared with some regional markets. For example, IPOs in Indonesia, unlike those in Malaysia, call for a form of hard underwriting on the part of the lead banks, while pre-emption requirements there can make sizeable placements tricky to execute. And while bumiputra rules still place a 30% cap on equity investments by non-ethnic Malays, these have been relaxed in several sectors over the last few years, and more changes have been announced.

In spite of the market’s limitations, Malaysia recently posted two major ECM deals by any measure: the US$3.3 billion relisting of telecoms operator Maxis Bhd in late 2009 and the US$4.1 billion IPO of Petronas Chemicals in November 2010. And that’s not the whole story. Petronas also spun off Malaysia Marine and Heavy Engineering in a US$659 million IPO last October, while sovereign wealth fund Khazanah offloaded sizeable stakes in Malaysia Airports, CIMB Bank and Telekom Malaysia this year.

In fact, according to Dealogic, ECM activity in Malaysia in 2010 at more than US$11 billion was worth more than in any other year since 2000, with 77 transactions successfully brought to market. That was more than twice the previous record in 2007. 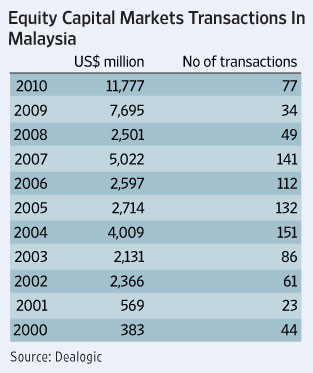 Bursa Malaysia has also successfully become the top exchange for Islamic securities. As of November 26 2010, 856 securities listed there (equivalent to 88% of all listed securities and 64% of market capitalization) had been determined as Shariah compliant, including three REITs and one ETF.

The exchange is also by far the largest listing venue world-wide for sukuk, with 19 of these Islamic debt securities listed by 17 issuers, representing more than US$27 billion as at December 1 2010, according to The Malay Mail. And according to ZawyaSukuk Monitor, issuers from Malaysia accounted for more than 90% by value of all sukuk issued in 2010. Many of these deals are denominated in ringgit, however, and also bought by local investors, thanks to tax incentives. However, Malaysia is also now starting to lure both international issuers and buyers with sukuk denominated in U.S. dollars and with Shariah standards closer to those prevalent in the Middle East.

Prime Minister Najib Razak has openly pledged to introduce further changes to Malaysia’s financial markets. And while participants keenly await details, Malaysia should be one market to watch in 2011.