HONG KONG (Dow Jones Investment Banker) – The board of San Miguel Corp., the Filipino beer-to-infrastructure conglomerate, approved the reorganization of its power business and an increase in its share capital on August 12. After exploring several options, including a possible backdoor listing, San Miguel has settled for an IPO in Manila of up to US$500 million for its 75% subsidiary SMC Global Power Holdings. Macro factors, as well as current expansion plans for the business, look attractive, but San Miguel shareholders are unlikely to gain much through the value arbitrage.

Following the submission of a draft prospectus earlier this week, investor education is scheduled for October, subject to market conditions and approval by the Philippine Stock Exchange and the Securities and Exchange Commission. Goldman Sachs, Standard Chartered Bank, UBS, ATR Kim Eng and SB Capital have been mandated to lead the offering.

Assuming the deal size remains as flagged, this would be the third-largest IPO in the Philippines, behind those of Cebu Air Inc., which listed in 2010 with a US$611 million offering, and the US$523 million flotation of Henry Sy’s SM Investments Corp. in 2005. A major IPO in the Philippines is a rare occurrence indeed. According to Dealogic, only 13 above US$50 million equivalent have priced there since 2005, for a combined amount of US$3.2 billion.

The PSEI index is up 3.7% so far this year, but the whole market almost verges on illiquidity, with average daily trading of only US$130 million this year, 38% of which was by foreign investors. Valuations remain relatively high, with an average P/E of 15.4 times.

It’s not yet clear how much of SMC Global will be sold. The PSE has a minimum free float requirement of 10%, and San Miguel has indicated that it would retain at least 51% of the share capital.

SMC Global is one of the largest power generation companies in the Philippines in terms of installed capacity. Its main attractions are its size, and the diverse range of fuels it uses, which makes it less vulnerable to price increases and supply shortages. It also has ambitions to become a vertically integrated power company through the acquisition of coal mines to hedge against fuel costs. The company estimates that its generating capacity could double over the next five years, as it benefits from growing domestic demand. SMC Global’s 2010 pro forma revenues were US$1.55 billion, with Ebitda of US$510 million. 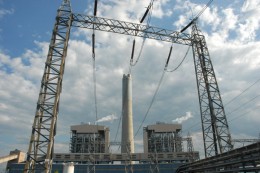 With four power plants, SMC Global had 29.2% of the total installed power generation capacity in Luzon-, and 21.7% of the national grid in 2010. It also owns 33.2% of Manila Electric Company (Meralco), which accounts for almost half of all electricity sales in the country.

Its main competitors are the Lopez Group, which, through First Gen Corporation, accounts for 20.8% of the national grid and 28% of the Luzon grid; and the Aboitiz Group, which through Aboitiz Power Corporation, has market shares of 17.8% and 23.9% respectively.

There are limitations as to how much the business can expand. Legislation currently imposes a maximum market share of 30.0% per grid and of 25.0% of the national grid, by installed capacity. There may also be conflicts of interest with Meralco, which is ultimately controlled by other shareholders.

Comparables in South East Asia, which include First Gen and Aboitiz Corporation, trade on average on a prospective 2012 P/E of 10 to 11 times.

San Miguel’s stock has been hammered after the combination of a US$350 million offering of treasury stock with an associated equity sale by selling shareholder Top Frontier, both at a 28% discount, and of a US$600 million exchangeable bond in April. The controversial multi-tranche deal saw the stock plummet 37% at time, although the share price has since recovered slightly, partly as a result of the announcement of SMC Global’s float, and now trades on a prospective P/E of about 12 times.

San Miguel may not get much mileage (if any) out of the IPO through the value arbitrage but it needs to de-lever. SMC Global, which is also highly geared, needs to issue equity to fund capital expenditure requirements.

If anything, SMC Global should at least prove an easier sell than its parent’s last foray in the equity markets.

[This article was originally published on Dow Jones Investment Banker on 25 August 2011 and is reproduced with permission.]