The ugly consequences of committed underwriting

HONG KONG (Dow Jones Investment Banker) – The US$500 million-plus privatization of national carrier PT Garuda Indonesia last month is widely thought to have been rushed and significantly overpriced, and some of the domestic underwriters reportedly may now need to raise capital to cover their losses. The sorry episode brings to light the practice of firm commitment underwriting of IPOs in some jurisdictions in Asia, and shows it actually does little for corporates, their shareholders and investors, let alone the brokerages involved.

Hard underwriting is widely used to ensure certainty of proceeds to issuers and their stakeholders, most particularly in overnight, follow-on transactions, and in rights issues. In such cases, based on the trading history of the shares and their average daily trading volume, the underwriters and the issuer determine an appropriate discount for a placement or block trade.

In Asian IPOs, soft underwriting – the underwriting of settlement after pricing – is the norm for institutional tranches, as it is elsewhere, but offerings to the public or retail investors are usually covered by underwriting on a committed basis at the outset.

Retail offerings can be done at a maximum price (with the buyer receiving reimbursement if the deal prices below the top end of the range) for offerings conducted concurrently with the institutional placement, or at a fixed price for sequential public offers. Some jurisdictions, such as Singapore, allow brokers to choose either method. Only in rare instances, such as in India or, in Europe, in France, do auctions or open-priced retail offers take place.

Transactions in Indonesia are different. The underwriters must provide a full underwriting commitment at the outset of an IPO for the transaction. While this is more of a moral obligation in that it doesn’t include a formal price, it’s understandable that Indonesian brokers would have been put in a particularly difficult position when asked by the government there to pick up on their books the unsold portion of Garuda’s IPO, said to have represented about half of the global offering. Garuda shares were trading at 520 rupiah (6 US cents) Monday, down 31% from their IPO price of 750 rupiah. 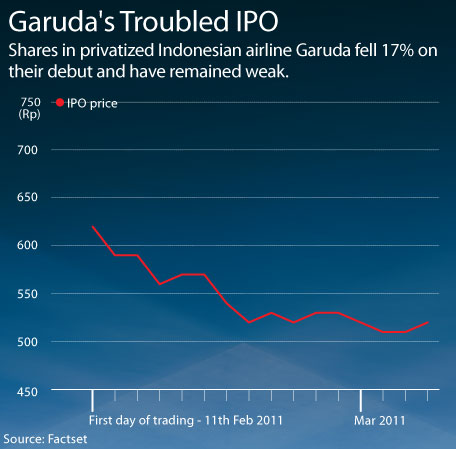 The Financial Times reports that Bank Mandiri (itself earmarked for further privatization in 2011), PT Bahana Securities and PT Danareksa Sekuritas are now said to be sitting on almost US$300 million of losses, with the latter two houses reportedly being forced to seek emergency funding. Bahana in particular is said to have taken US$82 million of unsold shares onto its books in the IPO, prompting a subsequent 60% fall in its working capital.

In the case of Garuda, it appears that the timing and pricing for the offering may have been imposed on the bookrunners, even though the book of demand was in no shape to support a deal of that size.

But more generally, it remains questionable why public offerings in IPOs continue to be underwritten on a firm basis at the outset in some jurisdictions.

There are some legal protections for brokers. Underwriting agreements generally include reallocation clauses, enabling the bookrunners to shift unsold shares between the retail and institutional tranches in the event of low subscription. In addition, the execution of each of these underwriting agreements usually remains conditional upon one another.

Applications under public offerings also normally entail payment in advance, while force majeure clauses allow underwriting obligations to be rescinded in extreme circumstances. Moreover, in most Asian markets, the retail tranches remain small, initially representing 5% to 10% of the overall issue on average.

The practice of hard underwriting fully marketed ECM offerings, as opposed to block trades and rights issues, often seems to be adhered to more from force of habit than for other reasons, and it sometimes takes a major event for market practice to be changed.

In 1998, the underwriters of a US$1.9 billion follow-on offering in Spain for the privatized tobacco firm Tabacalera (now part of Altadis SA) hard underwrote the deal prior to bookbuilding – as was then required – at what was thought to be a particularly wide 13% discount to market. But as volatility increased in the coming weeks and the share price tumbled, the syndicate was left nursing a painful, multimillion-dollar loss. Sure enough, market practice in Spain did away with hard underwriting in subsequent transactions.

As Indonesia embarks on an ambitious privatization program, including financial institutions, resources behemoth Krakatau Steel and construction and engineering companies, it should perhaps consult the history books, drop its outdated rules and acknowledge that, in the unpredictable world of ECM, market forces rule supreme.

[This article was originally published on Dow Jones Investment Banker on 8 March 2011 and is reproduced with permission].