They are heavy, they are brothers

Given the shabby state of markets, you might think that bankers would be wary of pitting two giant mainland firms from the same niche sector in head-to-head IPOs. But that is exactly what is going on with the duelling listings of Sany Heavy Industry and XCMG. Both are construction machinery makers looking to raise billions in a Hong Kong listing. Never mind that interest for one deal will likely cannibalise demand for the other, the floats are on a near identical timetable.

Sany is sounding investors on a US$3.4 billion equivalent IPO. Meanwhile, as reported last week in Money Post, XCMG Construction Machinery is also marketing its own US$1.5 billion Hong Kong float.

The question for investors, naturally, is which deal is better?

Sany has a different profile to XCMG. A much larger company, its product mix is also principally focused on other sub-segments of the construction industry. The bulk of its portfolio consists of profitable concrete machinery and, a growing business, excavators. One of its main competitors is Hong Kong-listed Changsha Zoomlion (1157), another manufacturer of cranes and liquid concrete pumps. 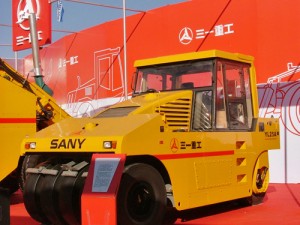 Conversely, XCMG is a leader in truck-mounted cranes, where it enjoys a market share of more than 50%. It is also strong in earth-moving machinery.

Both companies are also pretty much exclusively China plays, although XCMG has a marginally stronger international business.

Sany, already listed in Shanghai, trades at a higher price-earnings multiple, but it has delivered widely superior returns to domestic investors. And, importantly, while both companies have strong financials, Sany posts much higher gross and net margins.

Sany, like Zoomlion, is based in Changsha, the capital of Hunan province, and is the largest construction machinery maker in China, based on 2010 sales. Its market capitalisation of 119.8 billion yuan (HK$146 billion) is about 2.7 times that of its rival XCMG, which is listed in Shenzhen.

Sany is valued at a prospective price-to-earnings ratio of about 13.5 times, but over the last year posted a much-pleasing return of 78% in its share price. At the time of writing, however, this was down by about 11% since the start of July.

It’s largely a domestic story for now, with more than 97% of revenue at March 31, 2011 coming from the mainland. While still minimal, its international operations also include business carried out in such high-risk locations as Iran, North Korea and Sudan.

The company states in its prospectus that it’s keen to expand overseas, as perhaps best illustrated by the recent opening of a US factory.

According to consultants Yengst Associates, China accounted for 40% of worldwide machinery sales in 2010, compared with 9% in 2005, a staggering increase, with Sany ranking sixth globally. The PRC construction machinery market also grew at a compound annual rate of 30.1% between these two date points.

Sany says its business is sensitive to commodity prices, in particular steel. Its 2010 revenue increased almost 79% to 33.9 billion yuan. They almost doubled in the first quarter of this year, compared to the same period last year.

Sany and XCMG are similar companies with comparable growth stories. Much will come down to how the respective deals are priced. However, Sany’s larger size and better profit record suggest that, of the two, this could be the deal that catches fire.

Bookbuilding for Sany’s 1.34 billion share offering is slated to start on September 19, with trading scheduled for October 3.

Philippe Espinasse worked as an investment banker in the US, Europe and Asia for more than 19 years and now writes and works as an independent consultant in Hong Kong. He is the author of IPO: A Global Guide (HKU Press).