I was back in CNBC’s Hong Kong studio this morning to comment on “The Call” hosted by Bernie Lo, on Hong Kong Electric Investments’ IPO trading debut on HKEx.

The deal size was US$3.1 billion, subject to potential increase through a 15% over-allotment option, which makes it the world’s largest IPO since the listing of Royal Mail in the UK in October 2013 (US$3.2 billion), according to Dealogic. The flotation is also the second largest utility and energy IPO on record in the Asia-Pacific region (behind that of J-Power in Japan in 2004).

Quite notable for a large IPO in Hong Kong, the transaction only included two bookrunners, Goldman Sachs and HSBC, and with decent fees to boot (2.5% and an additional incentive component of 0.50%). Ten co-lead managers also figured in the underwriter group, mostly commercial banks probably included for relationship reasons and (for some) to broaden initial and ongoing research coverage. 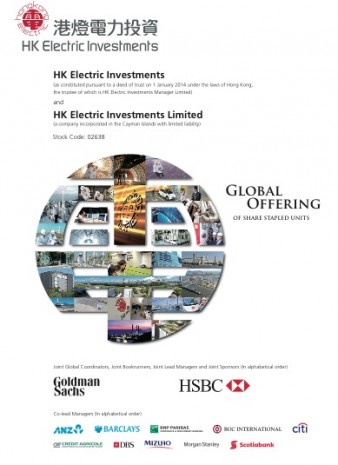 Hong Kong Electric Investments is an investment trust spun-off from Hong Kong-listed Power Assets (itself down 5% over a year). The deal was priced at HK$5.45 per unit, at the low-end of the indicative price range and equivalent to a 2014 yield of 7.2%. The range was lowered from that mentioned at the start of pre-deal investor education. Initial yield expectations were around 5.5% at the more aggressive end, so a substantial increase was needed to get the deal away. Similarly, up to 70% of the trust was initially targeted for sale, but this was revised to 50.1% in light of the lower pricing.

The Hong Kong public offering was 7.46 times covered, while the institutional tranche was only moderately oversubscribed, according to the stock exchange filing on allotment results. The offer structure also included a US$200 million public offering without listing in Japan, which is increasingly rare nowadays, and perhaps an indication that the leads had to leave no stone unturned to gather demand.

The IPO had to face a number of investor concerns: The scheme of control for the business’ operations expire at the end of 2018, so there were doubts that it may not benefit from similar guaranteed tariff rates in the future. Hong Kong Electric Investments is also a Hong Kong-focused business, where it is active on the islands of Hong Kong and Lamma only.

Two cornerstone investors featured in the deal, one of which is an SOE, State Grid Corporation of China, which chipped in for approximately 36% of the offering. The other, the sovereign wealth fund of Oman, only came in for a small amount. So it looks like the bookrunners perhaps had difficulty finding early institutional support for the transaction.

Yield-based stocks and business trusts in particular have generally had a pretty poor performance of late. Li Ka-shing’s HPH Trust is down 33% since listing in 2011. Similarly, Hui Xian Real Estate Trust is also 27% below water since its flotation that same year. Hong Kong Telecom’s trust, however has done well. Concerns over tapering and rising interest rates are obviously not conducive to investing in counters exhibiting high dividends. It’s also possible that Li Ka-shing sought to achieve a more realistic pricing to pave the way for his multi-billion dollar IPO in Hong Kong of retailer Watson’s later this year

As feared, the quality of the book assembled by the bookrunners may have weighed negatively on the stock’s performance. The sell-off in emerging markets stocks probably also didn’t help, although the Hang Seng index was up 0.7% this morning. Hong Kong Electric Investment’s shares were trading almost 3% down by mid-morning.

This was very large IPO, both for Hong Kong and in global terms, but it looks like demand was relatively tepid, resulting in size and pricing having to be sweetened for investors.