HK IPOs: the ‘new regime’ is still on slow speed

A new regime for sponsors of initial public offerings and the vetting of new listing applications in Hong Kong entered its second phase on April 1.

Regulators and investors alike hope that the changes will ultimately result in better disclosure and higher quality issuers coming to market. However, with close to 70% of Hong Kong’s new issues trading below their IPO prices in this year’s first quarter alone, an urgent quick fix is clearly also needed in the way transactions are marketed there.

From now on, draft prospectuses submitted for listing applications will be published on the website of the stock exchange of Hong Kong – a practice broadly similar to those of the U.S. and Malaysia. Those offering circulars not deemed to be “substantially complete” and that fail to pass a three-day initial assessment will not proceed to the detailed review stage. Their sponsor firms will also be “named and shamed” (online) and the related listing documents subject to an eight-week moratorium before they can be re-submitted for vetting. The initial screening is based on a comprehensive regulatory checklist designed to ensure a minimum amount of prescribed information is included in offer documents. It is not meant to be exhaustive and the extent and nature of additional disclosure will continue to be determined by the demands of sponsors, on the basis of the due diligence they have conducted. 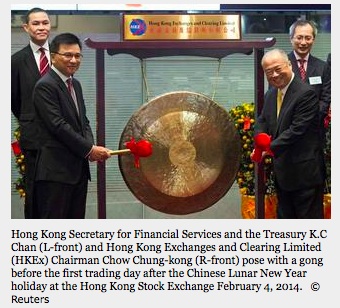 It is early days but, so far, the new rules, first introduced last October, appear to be working. The rejection rate for new applicants has already more than halved between Oct. 1, 2013 and March 31 this year. However, 13 of the 20 IPOs that have come to market in 2014 are currently trading below their offer prices. One company, night club operator Magnum Entertainment, whose IPO was an unqualified success with retail investors, even issued a profit warning barely two months after its listing, bizarrely blaming “non-recurring listing expenses” for its predicament.

While the quality of disclosure generally seems to be on the right track, the way flotations are conducted in Hong Kong also warrants closer scrutiny, to ensure robust registers of institutions can be gathered through bookbuilding by underwriting syndicates.

Key to the success of many IPOs in Hong Kong are cornerstone investors – institutions that commit in advance to taking a large chunk of the deal at the offer price, de-risking the marketing process and, in theory, leading to higher valuations. In Hong Kong, many prospective cornerstones routinely decline participating on account of the required six-month lock up period that accompanies such status. This results in transactions subscribed to a significant extent by Chinese state-owned enterprises and other corporates, admittedly not natural buyers or traders of stock in the aftermarket. Other exchanges, such as those of Malaysia or Singapore, offer much greater flexibility for the gathering of cornerstone tranches – something that could inspire the regulators in Hong Kong.

Another feature of new listings in the territory in recent months has been the disproportionately large number of senior underwriters appointed for most of the larger transactions, as evidenced by the 28 banks chosen by pork producer WH Group for its proposed $5-6 billion IPO, which is currently in its investor education phase. This “top heavy” approach leads to frustration, inefficiencies in terms of execution and legal cost overruns. It also introduces major flaws to the marketing process: indeed, coordination and clear messages from the banks to investors should be the priority amid challenging market conditions, an impossible feat with such a large number of parties involved. Another outcome is lower fees available to each bookrunner, hence often a lack of attention and commitment to the deal and client, with many of these offerings coordinated by younger, inexperienced practitioners.

Addressing the way deals are actually brought to market is probably less easily remedied than disclosure issues: investment banks are not known for turning down new mandates and the league table credit often more than makes up for the lack of commissions they bring in.

The Hong Kong’s marketplace reputation is its best asset and there is clearly more to restoring investor confidence in IPOs there than listing rules, due diligence and prospectuses. Inflexible marketing practices are also to blame – and must be fixed. E-commerce giant Alibaba recently chose the US over Hong Kong for its proposed, high profile multi-billion dollar new listing. More issuers could soon follow.

Philippe Espinasse was an investment banker in the U.S., Europe and Asia for more than 19 years and is now an independent consultant and author in Hong Kong. His new book, “IPO Banks: Pitch, Selection and Mandate” will be published later this year.

[This column was originally published in the Nikkei Asian Review]