The price will be right

Pre-IPO research has once again been in the spotlight in two recent Hong Kong transactions. In both, the issuers were said to have been leaning on brokers to produce valuations that met their expectations.

According to FinanceAsia, in the case of The People’s Insurance Company (Group) of China’s IPO, the banks were allegedly threatened with a downgrade in the pecking order for the underwriters if they failed to meet a minimum valuation in their research reports. Oddly enough, at the opposite end of the spectrum, in the case of the Future Land IPO, one of the joint-bookrunners was reported in a Reuters article to have been dropped, for failing to show a discount to net asset value (NAV) sufficiently attractive to investors.

Research and IPOs make for somewhat uneasy bedfellows and the relationship has been hotly debated ever since the dotcom boom (and bust) of the early noughties, when overly zealous analysts’ reports inflated companies’ prospects to stoke investor interest. Pre-deal research is not something retail investors see. It includes information that’s consistent with that in the prospectus, but in a way that’s easier to read. It dispenses with much of the legalese, and also comprises analysts’ views on the immediate financial prospects for the issuer, as well as, a tentative valuation. This, in turn, is used during the two-week investor education process that culminates with the setting of the bookbuilding price range – the top end of which serves as the price paid under the public offer. 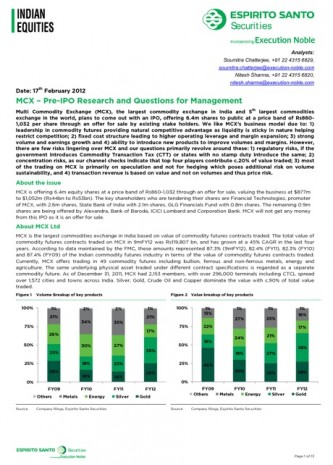 Theoretically, research analysts are free from the influence of their corporate finance colleagues, and compute valuations in an independent fashion. That’s a far cry from 15 or 20 years ago. As a junior banker in London, I remember writing a research report   after the designated analyst on the deal jumped ship to another firm mid-way through the transaction. I also recall doctoring reports to make them more attractive, to paint the company in a better light. That was a long time ago – it would be unthinkable today.

That said, one or more banks posting valuations at odds with those of the rest of the syndicate can be a major embarrassment – and  even threaten a deal’s outcome. So, in practice, equity capital markets desks might informally compare notes prior publication, using some multiples as reference points. Not necessarily with a view to changing them, but at least, to be aware of any significant outlier – whose firm may perhaps be persuaded not to publish. American and British houses in particular take the interaction between research analysts and their corporate finance colleagues very seriously, and compliance officers are present at any call or meeting to ensure nothing untoward transpires.

The recent practice in Chinese deals of appointing a dozen or more senior banks, and confirming their exact roles (and therefore, ultimately, their economics) closer to – or even after – launch, clearly does not help, and threatens research analysts’ independence. It puts pressure on the brokers to meet the issuer’s expectations so as to secure a coveted bookrunner or even global coordinator ticket, which are key to making it big in the league tables. Effectively, these firms remain in marketing mode with the CEO or CFO, when they really should be focusing on selling the shares. Any bad news on valuation can then be bumped to the pricing meeting, and blamed on a change in market conditions, in classic “bait and switch” fashion.

Banning pre-deal research – as in the US – is not the solution; it leads to little more than premature valuation guestimates – and to confusing, moving price ranges (remember Facebook’s IPO?). According to information provider Dealogic, since 2008, only 49% of America’s IPOs have priced in their initial ranges, compared with 93% in Europe and the Asia-Pacific region.

[This article was originally published in The South China Morning Post on 3 December 2012 and is reproduced with permission.]